This is part two (part one) of graph theory, focusing on “Small World Graphs”, with PowerShell based on (Chapter 3) of the excellent book Think Complexity 2e by Allen B. Downey (in fact I’d highly recommend any of the books in the “Think…” series some of which I might cover in future posts). The book and the book’s source (in Python) are available for free through the book’s webpage (the physical book can be purchased too).

Small World Graphs are graphs in which most nodes are not neighbours of one another, but the neighbors of any given node are likely to be neighbors of each other and most nodes can be reached from every other node by a small number of hops or steps.

Most people have heard of Small World Graphs in conjunction with the small-world experiment conducted by Stanley Milgram leading to the infamous phrase “six degrees of separation”.

We will try to replicate the experiment based on the work of Watts and Strogatz. The Watts-Strogatz model is a random graph generation model (we talked about random graphs in part one of this series) that produces graphs with small-world properties, i.e. short average path lengths and high clustering, which neither regular graphs (see below) nor random graphs exhibit at the same time.

The Watts and Strogatz model suggest the following steps to generate a Small World Graph:

In a ring lattice graph the nodes are arranged in a circle with each node connected to the specified nearest neighbours.

Enough theory let’s use some code. First, we’ll need some of the helper functions created in the first part.

We create a helper function to generate a Ring-Lattice graph.

Let’s create a Ring-Lattice graph with 10 nodes and 4 connections per node.

To turn our Ring-Lattice graph into a small-world graph we need to “re-wire” the nodes. The algorithm for the re-wiring should follow this logic:

We can re-use the Get-Neighbours function from my previous post.

Below are three Small World graphs with the following properties:

As a next step, we need to develop methods that help us to evaluate the clustering and path-length properties of the produced graphs.

A cluster can be defined as a set of nodes with edges between all pairs of nodes in the set. The clustering coefficient for a node is given by the proportion of actual links between the nodes within its neighbourhood divided by the number of links that could possibly exist between them. If we iterate over every node of a graph and calculate this proportion and take the average of those, we are getting the Clustering coefficient for the graph. The number of unique connections between a set of n nodes can be calculated with the formula

If you imagine a room with n people, where you want to determine the number of unique pairs:

Below is the implementation of the clustering coefficient algorithm.

If we test with our Ring-Lattice graph from our, we can get the expected .5 (each nodes has 4 neighbours with 3 connections out of possible 6 connections)

There are several well-known algorithms to do this one of them is the Dijkstra algorithm. The algorithm is based on breadth-first search which means that the search starts with the immediate neighbours of a node before traversing deeper into the graph by looking at the neighbour’s neighbours and so on. We can use a simplified version of the Dijkstra algorithm since we are dealing with undirected graphs where each edge has an equal weight.

At a high level, the algorithm works like this:

The function returns an object array with Source, Distance, and Destination properties. If we use it on the first node of a our previously created Ring-Lattice graph (added here again for convenience), we get the following result: 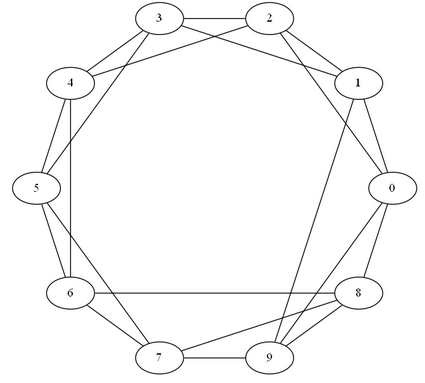 To get the average shortest path length for a whole graph we need to … :

Great, now we have everything in place to do duplicate the Small-world experiment. Showing that there are Small-Word graphs with a certain range of probability (for re-wiring) with high clustering-coefficients (like regular graphs) and a short average path lengths (like in random graphs).

In practice it turned out that, at least with the sloppy version of my code, the PowerShell functions are not executing nearly fast enough to carry out the experiment with 1000 nodes for each graph and 10 connections each. Even though I have added multi-threading to the Shortest-Path parts using PSThreadJobs’s Start-ThreadJob function since this is definitely the bottleneck. 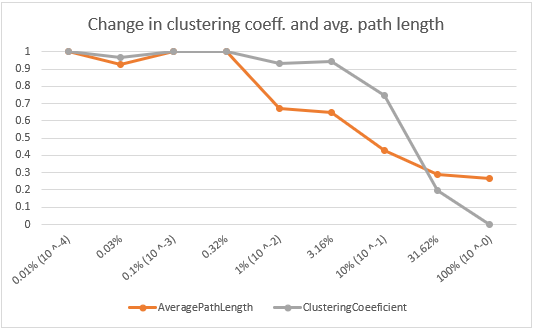 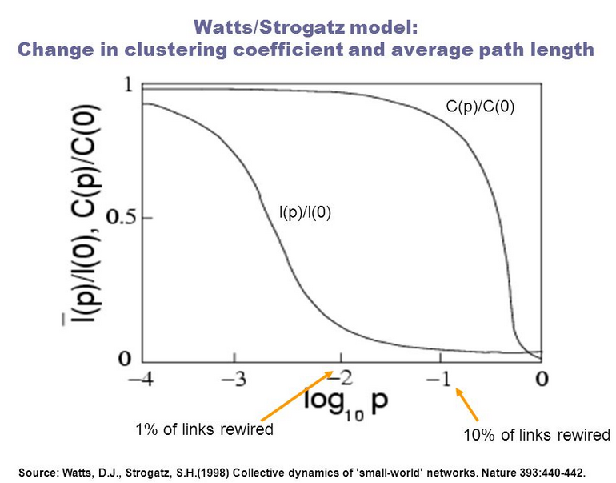 View all posts by Dirk

I'd love to hear what you think Cancel reply